The common household weed killer RoundUp, and actually the most widely used herbicide in the world, has now been linked to cancer. The product’s purpose is to kill unwanted plants from yards, farmland, parks and other similar types of properties.  However, the International Agency for Research on Cancer (IARC) released a report in 2015 citing RoundUp’s active ingredient, glyphosate, as a “probable human carcinogen.” With new cases being filed nearly daily, the weed killer’s manufacturer, Monsanto (Bayer), is facing cancer lawsuits from over 40,000 plaintiffs.

If you or someone you love believes they are suffering from a RoundUp-related illness, especially if diagnosed with non-Hodgkin’s lymphoma, contact the Roundup weed killer lawyers at Dunken Law Firm. 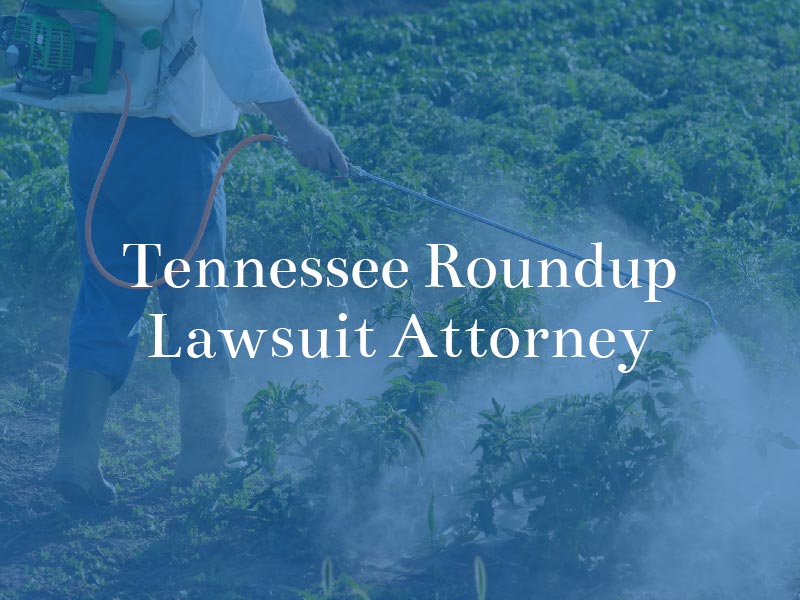 What are the Top 10 Counties With the Highest Glyphosate Exposure in Tennessee?

We are helping RoundUp victims across Tennessee, including the following top 10 counties with the highest reported rates of glyphosate exposure:

Call (713) 554-6780 and schedule a free consultation today with our mass tort lawyers about your Roundup lawsuit in Tennessee. Find out the types of compensation you may be entitled to.

How Does Roundup Exposure Occur?

There are three primary ways in which RoundUp or glyphosate may enter the body: breathing in the chemical through the nose or mouth, eating food that has been treated with Roundup, drinking contaminated water, and absorbing it through the skin.

Which Consumers are Most at Risk?

People who are consistently exposed to glyphosate are at the highest risk of developing cancer or another related condition. That includes individuals who work with crops sprayed with RoundUp, most commonly corn, cotton, soybeans, sugar beet, and wheat. Additionally, farm workers, landscapers, garden center or nursery employees, and groundskeepers are typically in danger.

Is Glyphosate Linked to Cancer?

According to the IARC’s evaluation, it specifically stated there was “limited evidence of carcinogenicity” for non-Hodgkin lymphoma in humans exposed to the herbicide. This evidence was gathered from studies of exposure in the US, Canada, and Sweden, primarily agricultural in nature.

In addition to it being a probable carcinogen, the IARC noted that glyphosate causes DNA and chromosomal damage in human cells. In one study, an increase in blood markers of chromosomal damage was found in residents of a community after glyphosate formulations were sprayed nearby. This type of genetic mutation can lead to cancer.

A study published in February 2019 further confirms the IARC’s findings, alarmingly reporting that high exposures of glyphosate increase the risk of developing NHL by 41 percent.

The following three RoundUp cancer cases are the only ones to have made it to trial thus far, and have all resulted in favorable verdicts for the plaintiffs:

The first-ever trial began on 6/18/18 and ended nearly two months later in California, with a $289M verdict, that was eventually reduced to $78M.

Beginning on 2/25/2019, this first federal trial lasted just over a month and resulted in a jury verdict of $80M awarded to the plaintiff, but was later reduced to $25.2M.

After a one-and-a-half month long trial ending on 5/13/2019, a California jury awarded a couple $2.055 billion for their RoundUp-related NHL diagnoses, which since then has decreased to $86.7M. This was the first ever CA JCCP trial.

Tennessee victims of the dangerous product RoundUp have the right to be compensated by Monsanto (Bayer) for their suffering. We will fight on your behalf to secure the justice you deserve. Call our office today at (713) 554-6780 or reach us online. Our Tennessee Roundup lawsuit attorney will evaluate your case and discuss your legal options.