Am I Entitled to Compensation from Roundup Exposure?

Lawsuits for cancer caused by RoundUp exposure are on the rise. RoundUp is the most popular herbicide in the world, however its main ingredient glyphosate has been connected to increasing the risk of developing non-Hodgkin’s lymphoma (NHL). If you have frequently been exposed to RoundUp and have been diagnosed with cancer, you may be entitled to compensation from the product’s manufacturer Monsanto (Bayer). 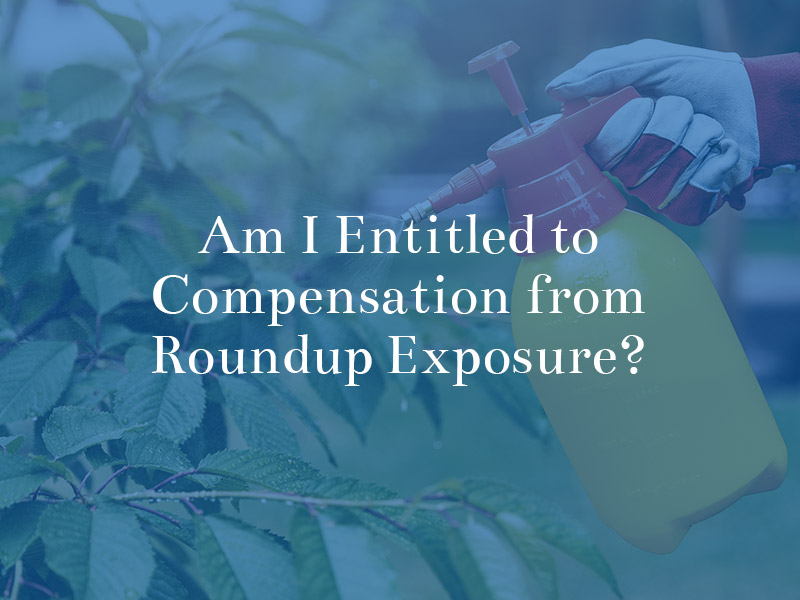 Certain individuals are especially at risk from the product, due to consistent and high exposures. Those people include:

Though chronic use seems to have the most harmful effects, Roundup may be dangerous for homeowners too.

Multiple studies have linked the development of specific types of cancer to RoundUp exposure. The most common being NHL, multiple myeloma, and leukemia. NHL also has certain qualifying subtypes:

However, if you or a loved one have a history of using Roundup in your yard or while at work and is suffering from any form of cancer or illness, then you may be eligible to file a cancer claim against Monsanto.

RoundUp cancer victims who file lawsuits are able to pursue the following damages:

Family members who have lost a loved one due to an NHL diagnosis related to RoundUp, may also be able to recover damages for funeral and burial costs, as well as any other related expenses.

As lawsuits over RoundUp have surpassed 18,000, there have been three jury verdicts in favor of plaintiffs, but not a single settlement with Monsanto (Bayer). Now, the chief executive of Bayer, which recently acquired Monsanto, is saying he would consider a “financially reasonable” settlement of litigation. Even so, no further explanation has been given as to what that amount might be and a global medication discussion regarding compensation has not yet occurred. Monsanto (Bayer) continues to insist on RoundUp’s safety and is vigorously trying to have cases dismissed.

After the third successive loss by Bayer, the damages have exceeded $2 billion:

In the first RoundUp cancer lawsuit to reach trial, a California jury ruled in favor of a 46-year-old groundskeeper who developed NHL after years of spraying RoundUp while on the job. The jury agreed that Monsanto failed to warn consumers of the cancer risks associated with using their product. The judgment was later reduced to $78M.

The second trial to reach a verdict, in which another California jury found that RoundUp was a “substantial factor” in a California man’s diagnosis of NHL. The victim had been using RoundUp around his house for decades. A judge later lessened the damages to $25M.

The third California jury to reach a verdict, ordering Monsanto to pay damages to a Livermore couple who developed NHL after using RoundUp for more than 30 years. The award has since been slashed down to $86.7M.

Although the amount of compensation in each case has decreased with time, the consecutive wins for victims is a positive indication of what outcomes could hold for future cases.

We Will Review Your Case for Free

Contact The Dunken Law Firm if you or a loved one has developed cancer from using RoundUp. Our Roundup cancer lawsuit lawyer will alleviate you from any legal stress and recover the compensation you need and deserve. Discuss your legal options today by calling (713) 554-6780 or requesting a free consultation online.