Child labor and child labor trafficking remain a major problem on a global scale: approximately 170 million children are engaged in child labor, according to the International Labour Organization (ILO). Of those, approximately 5.5 million are subjected to forced labor, often a result of trafficking.

We don’t expect child labor to be an issue in first-world countries – but unfortunately, child labor remains an issue, even in the United States. In fact, the U.S. has unfortunately seen a steady increase in child labor and trafficking in recent years due to lax labor laws and enforcement. 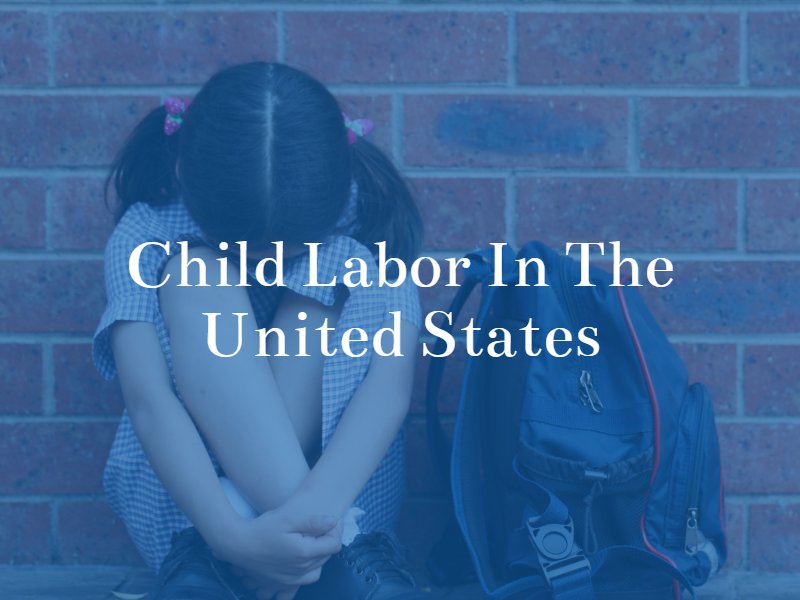 What is Child Labor?

According to the United Nations, child labor is defined as “work for which the child is either too young – work done below the minimum required age – or work which, because of its detrimental nature or conditions, is altogether considered unacceptable for children and is prohibited.”

In the United States, the standards for child labor is detailed in the Fair Labor Standards Act. This bill limits the hours that any children under 16 can work, while also detailing standards for occupations and other jobs that may be too hazardous for children to perform.

How Big of An Issue is Child Labor in the United States?

Although child labor has largely been strictly enforced in the United States, in recent years there has been a rise in child labor due to state laws that roll back limits on hours and types of jobs children are allowed to work. Additionally, some industries (such as agriculture) are exempt from any standards set forth by the Fair Labor Standards Act, enabling farms and other related organizations to freely employ kids.

For example, Human Rights Watch found out that various tobacco farms in states like Kentucky and North Carolina were utilizing children as young as 7 to help harvest and process the crop in tobacco fields. As a result, many have reported symptoms of nicotine poisoning: headache, nausea, dizziness, and vomiting.

Although many of those children voluntarily decided to work these jobs, in many cases, these children may be victims of trafficking.

What is Child Labor Trafficking?

Often, child labor trafficking occurs due to some perceived debt that the child has to the employer. This is commonly the case with undocumented minors who flee from other countries to seek asylum and/or jobs. In many of these circumstances, children are forced into indentured servitude for their smugglers to pay off any of the costs and risks of helping them travel across the border.

What Are Risk Factors for Child Labor Trafficking?

A few significant factors may increase risk of children being subjected to labor trafficking. These can include:

Children who are essentially disenfranchised are at the greatest risk of labor trafficking, solely because they believe they have nothing to lose by entering such an arrangement.

What is the Difference Between Child Labor and Labor Trafficking?

Although child labor and labor trafficking are both serious human rights issues, it is important to note the differences between the two as well.

The key difference between both is that labor trafficking is often coerced by an adult or other party. In many cases, children who participate in child labor do so willingly – despite the potentially hazardous conditions. In labor trafficking, children are emotionally abused into thinking they must work to pay off any debts they may have.

How Can We Stop Child Labor Trafficking?

Ensuring that everybody is informed of the real issues that our disenfranchised youth are experiencing can go a long way into inspiring change for the better. Learn more from our mass tort litigation attorney at The Dunken Law Firm.