People who own livestock often keep track of them with a unique brand that identifies their owner. Unfortunately, the same commonly occurs with victims of human trafficking: they are forced to receive a tattoo or some other mark to distinguish that they “belong” to someone. 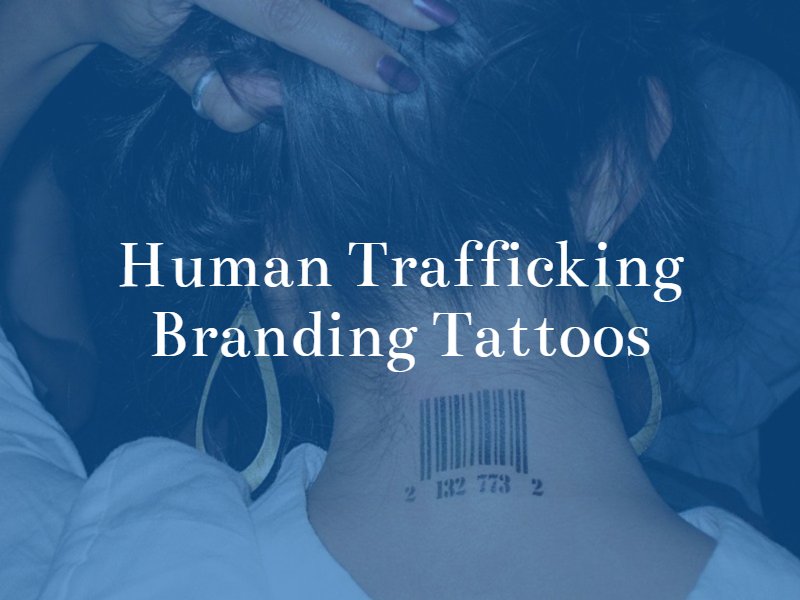 Why Do Human Trafficking Victims Have Tattoos?

Trafficking victims often receive tattoos primarily as a distinctive mark to indicate a trafficker’s “property.” They are often used to keep track of the victims by traffickers – especially in situations where there are a large number of victims.

In some instances of sex trafficking, tattoos may also be used to indicate the asking price of their services – shown in a tattoo that looks like currency, such as money symbols, coins, and dollar bills.

Unfortunately, some victims of trafficking also receive tattoos on their own volition. They have been manipulated and emotionally abused into thinking that their life is now better under the traffickers’ wing than it previously was. As a result, they receive tattoos to show loyalty or gratitude to the trafficker was “saving” their lives.

Tattoos on trafficking victims can vary widely, depending on the trafficker, the context of the trafficking, and a number of other factors. Common themes include:

How Can the Dunken Law Firm Help?

At The Dunken Law Firm, we strive to assist all victims of human trafficking. This includes helping those who may have received a tattoo against the will – and those who received one under abusive circumstances. We understand that any such tattoos can create a lasting impact on the psyche and mindset of trafficking victims, so through our fight, we attempt to find solutions to these tattoos.

We work with local authorities and any other outreach groups to find help for those with tattoos. We even have the resources to reach out to any tattoo artists who can lend their services. Police across the country have held workshops for tattoo parlors and artists to help them in the fight against human trafficking. This includes giving them the information necessary to point out any red flags in those seeking tattoos, and also being observant of any existing tattoos that may be a sign of human trafficking.

Ultimately, we are committed to the well-being of these victims, and we want to see them receive the help they deserve.