Can Vaping Cause Lung Damage?

Vaping has been advertised as a safer alternative to tobacco cigarettes since the introduction of e-cigarettes in the early 2000s, however, people have recently begun experiencing serious lung damage. As of now, the Centers for Disease Control and Prevention (CDC) reports there are nearly 1,300 cases of lung injuries and 29 deaths related to vaping. The CDC also issued a warning, advising consumers to discontinue vaping with products that contain nicotine. 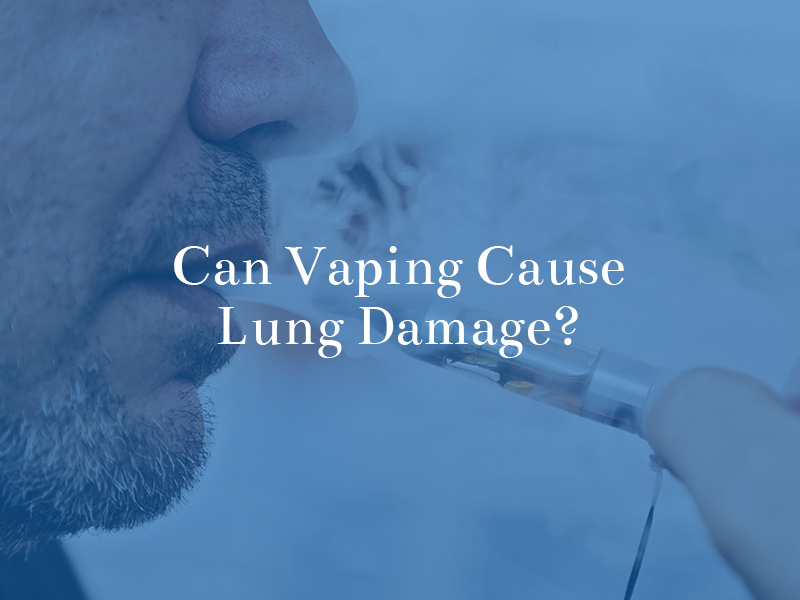 What Vaping Is and How it Works

The use of an electronic cigarette (e-cigarette) is often called vaping. A vaping device or pen heats a volatile liquid in a cartridge that the user then inhales. Rather than burning tobacco, a vape simply turns a liquid into an aerosol. The combination of main ingredients in what’s known as the e-liquid, or more popularly dubbed vape juice, typically consists of propylene glycol and/or vegetable glycerin, a non-oil food-grade flavoring, and nicotine. Vaping devices can also contain and be used to smoke marijuana.

How Can Vaping Can Damage Your Lungs?

The National Academies of Science, Engineering and Medicine analyzed over 800 existing studies then published a consensus in 2018, stating that there are health-related risks associated with e-cigarettes. The report found the following:

Many of the additives and flavor combinations used in e-liquid cartridges are Food and Drug Administration (FDA) approved, however only for oral consumption and not for inhalation. Since vaping is relatively new, research is still being conducted into the potential mid-to-long-term adverse effects. Making it more difficult is the fact that there is so much variation between e-cigarette devices, each having different ingredients and hardware. This is a huge factor in consumer safety, and why there is a need for regulation.

Officials are continuing to investigate the outbreak of lung injuries associated with vaping, that are occurring throughout the U.S. Based on data gathered by the CDC, 76 percent of the 1,299 victims reported using vape pens containing THC, and 36 percent used THC pens exclusively prior to showing any symptoms. Additionally, 58 percent of all victims reporting lung injuries used e-cigarettes with nicotine. The immediate symptoms of vaping-related lung injuries which are warranting medical care, include:

In response, several cities and states or working on banning e-cigarettes.

Have Your Case Reviewed for Free

The mass tort litigation attorney at The Dunken Law Firm have extensive experience holding manufacturers responsible for their dangerous products. If you or a loved one believes you have suffered lung damage in relation to vaping, you may be entitled to compensation. Schedule a free consultation to discuss your legal options by calling (713) 554-6780 or through our online contact form.