Understanding the Health Dangers of Juuling and Vaping

Vaping or “Juuling” may have seemed like an alternative solution to traditional smoking, however, a recent outbreak of vaping-related lung disease and deaths has people reconsidering. To date, there have been more than 2,000 cases of severe lung illness and 42 people have lost their lives throughout the U.S., due to e-cigarette use. Multiple brands of e-cigarettes have reportedly been involved, including Juul. Juul is a popular brand, especially among youth, due to its sleek appearance and shape that resembles a USB flash drive. 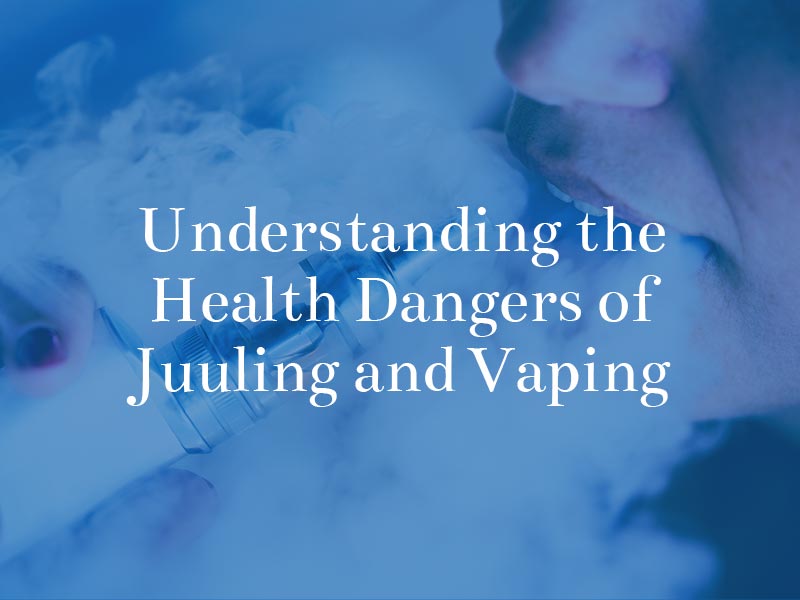 What is Vaping, or Juuling?

Vaping or Juuling is the act of inhaling then exhaling an aerosol that is created by a device which heats a liquid called “e-juice,” containing nicotine, chemicals, and flavoring. One JUUL pod, or cartridge, contains an amount of nicotine equivalent to a pack of cigarettes. However, the vape pens are made to sound harmless and are appealing to young people, as a result of the various flavors available, such as mango, creme brulee, popcorn, and combinations of fruits. According to the Centers for Disease Control and Prevention, “approximately two-thirds of JUUL users aged 15 – 24 do not know that JUUL always contains nicotine.”

What Are the Dangers of Vaping?

Adolescents and young adults are at a higher risk of addiction due to their brains not yet being fully developed. In addition, nicotine is a very harmful and dangerous drug that can affect the nervous system and heart. The larger the dose, the more a person’s blood pressure and heart rate go up, which can lead to an abnormal heart rate (arrhythmia). In severe cases involving incredibly high doses of nicotine, arrhythmias can cause heart failure and even death.

JUUL is unique in their patented formula of nicotine, which uses “nicotine salts.” This formulation more closely resembles nicotine’s natural structure when found in tobacco leaves. Whereas, other types of devices use “freebase nicotine,” a chemically modified form. With the use of nicotine salts, the e-juice is less harsh, making the aerosol easier to inhale for longer periods of time. As a result, JUUL devices deliver a much higher rate of nicotine than most other types.

A chemical that allows nicotine to be inhaled, and can cause lung and eye irritation.

Can cause a chemical-induced pneumonia when inhaled. In teens, aluminum has also been reported to damage developing bone.

Also found in batteries, and causes nausea, vomiting and diarrhea.

Can result in breathing problems, lung and throat irritation, and stomach pain.

When inhaled, can lead to nerve damage and digestive issues.

Also found in butter-flavored microwave popcorn, and when inhaled can cause scarring of the lungs, called “Popcorn Lung.”

It is a naturally-occurring acid found in the tobacco plant, and when breathed in, it can cause irritation to the throat and lungs, the nose, and may cause coughing, wheezing and/or shortness of breath.

Other side effects may include coughing, dry or sore throat, dizziness, nausea or stomach ache, and headaches. Unfortunately, many long-term health effects are not yet available since vaping is relatively new.

What Is Popcorn Lung from Vaping?

Popcorn lung is the common name for an incurable disease called bronchiolitis obliterans. It is a condition that can be caused by exposure to toxic fumes, which includes a flavoring chemical found in many vape devices, called diacetyl. The fumes irritate the lung tissue and cause damage to the smallest parts of the lungs, called the bronchioles and alveoli. These are the parts of the lungs where oxygen is stored, and carbon dioxide is released from your blood as you breathe. Due to scar tissue build-up within these tiny passageways, it makes it difficult to breathe and expel air.

Have Your Case Reviewed for Free

If you or a loved one has been diagnosed or is believed to be suffering from a vape-related illness, contact The Dunken Law Firm. Call (713) 554-6780 so we may schedule a free consultation to discuss your right to compensation and a potential juul vaping lawsuit.