What is the Link Between Popcorn Lung and Vaping?

Inhaling the smoke or aerosols from practically any form of cigarette will likely cause some type of an adverse health effect. However, many do not expect that their favorite flavor of an e-cigarette may be responsible for a serious medical condition called popcorn lung. Diacetyl, the ingredient linked to several severe cases of popcorn lung, can be found in a number of flavored e-liquids or vape juices. As a result, consumers are likely breathing in a large amount of the toxic chemical with every puff. 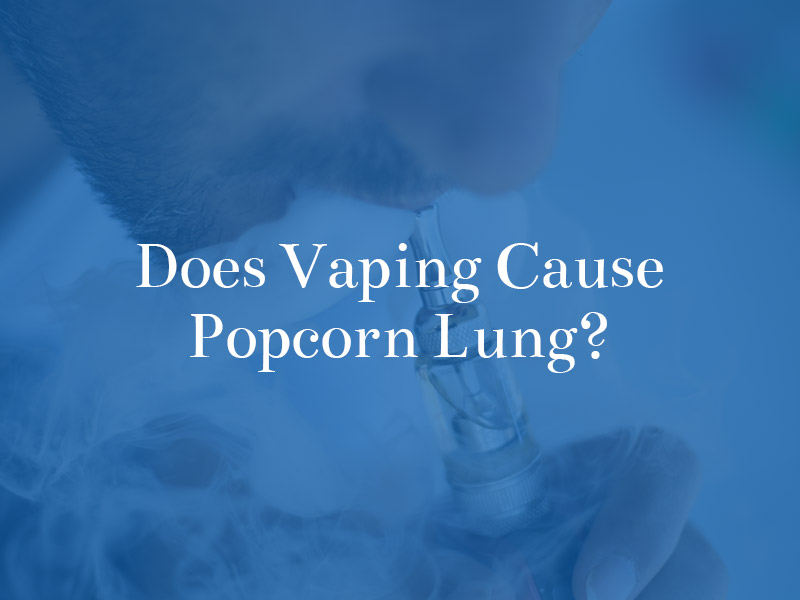 What is Popcorn Lung?

Popcorn lung, also known as Bronchiolitis Obliterans, is a condition that damages the bronchioles, the smallest airways of the lungs. Over time, inflammation causes lung tissues and airways to scar and narrow, making it harder to breathe. Symptoms will typically develop gradually, and can include shortness of breath, wheezing, dry cough, and fatigue. Popcorn lung is included within a larger group of disorders called interstitial lung diseases (ILDs). Some ILDs develop due to behavioral factors, such as smoking. While other ILDs, like popcorn lung, are caused by chemical exposure.

One of the particular dangers of popcorn lung is that the symptoms look indistinguishable from lots of other lung diseases, such as asthma or bronchiolitis obliterans organizing pneumonia. This means that it is often undiagnosed, resulting in improper treatment and allowing the damage and scarring to increase.

What Is Diacetyl and Why Is It in E-Cigarettes?

Also called by its chemical name, 2-3 butanedione, diacetyl was commonly used as a flavoring compound to bring out a “buttery” flavor in popcorn and other foods. That is until employees at factories that produced microwaveable popcorn were exposed to the chemical and began developing popcorn lung.

E-cigarette manufacturers began adding diacetyl into e-liquids, with the intent to mimic natural flavors such as mint, cupcake, coconut, cotton candy, cherry, and many others.  With the use of a vape pen, e-liquids are heated and transformed into an aerosol which can then be inhaled. Therefore, vaping results in diacetyl going directly into the lungs.

The Connection Between Popcorn Lung and Vaping

Numerous studies have found a strong link between the inhalation of diacetyl and the development of popcorn lung. A shocking analysis from Harvard University researchers found that 75 percent of the e-liquids they tested contained diacetyl. Fifty-one samples were tested from eight different leading brands, specifically chosen based on flavors that would appeal to youth. Out of those, 39 flavors had above the recommended level of diacetyl. Although a direct connection between e-cigarettes and popcorn lung was not proven, the evidence led researchers to announce that “urgent action is recommended to further evaluate this potentially widespread exposure via flavored e-cigarettes.”

Much more information on the potential link between vaping and popcorn lung is needed, as e-cigarettes only began being regulated by the U.S. Food and Drug Administration (FDA) in 2016.

In November 2019, a Canadian 17-year-old boy was hospitalized after suffering injuries consistent with popcorn lung, as a result of vaping. This case may be the first to corroborate a connection between vaping and the rare form of lung disease.

If you or a loved one believes they are suffering from an illness related to vaping, have a highly skilled mass tort litigation attorney at the Dunken Law Firm evaluate your Juul vaping lawsuit case. Your initial consultation is free, reach out to us today.