Teens & Vaping: Signs to Watch Out For

Convincing a teenager of the dangers associated with traditional cigarettes may be relatively easy, however vaping is a different story. Vaping has exceeded cigarette use in teens, with more than 3.6 million youth having tried e-cigarettes, according to the 2018 National Youth Tobacco Survey. Alarmingly, the report shows e-cigarette use has increased an astonishing 78% among high school students from 2017 to 2018. The most popular brand of e-cigarette called JUUL comes in flavors that sound like fruit or candy, making them much more appealing to youth. Now more than ever, it is important to know the signs of vaping in order to prevent teens from a lifetime of nicotine addiction. 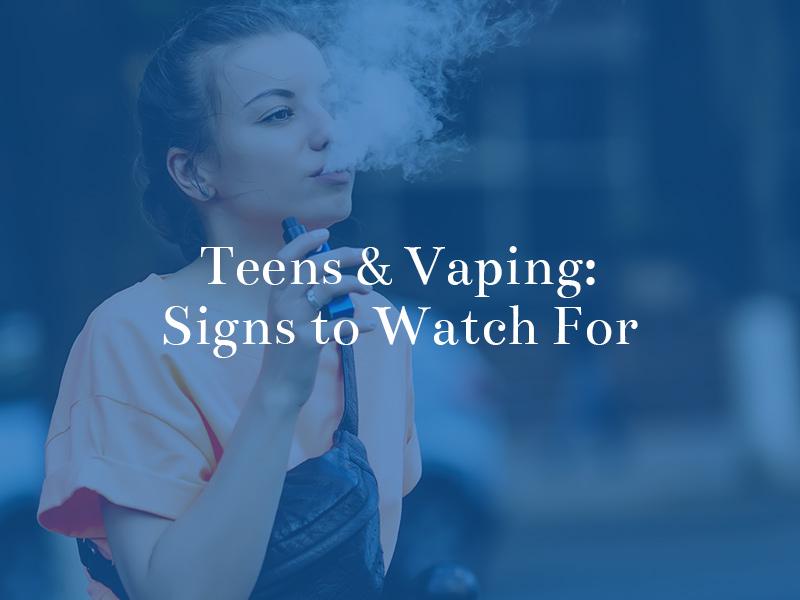 Using an e-cigarette device or a vaporizer is known as “vaping”, and may also be called “JUULing.” They are battery-powered devices that heat up a liquid solution, typically containing nicotine, flavoring, and a humectant—often propylene glycol or glycerol—at a high enough temperature that it turns into an aerosol for users to inhale. Some of the devices such as JUUL, the most popular of e-cigarettes amongst teens, are easily concealed as they resemble a USB flash drive by being sleek and rectangular. They can also be charged by plugging them into a laptop. Although marketed as a safer alternative to regular cigarettes, recent research is now linking e-cigarettes to a severe lung disease which can be fatal.

What Are the Signs of Vaping?

The odor of an e-cigarette is not as distinct as traditional cigarettes, which can make them difficult to detect. The following signs can help you find out if a teen is vaping:

E-cigarettes have a variety of flavors and can put off sweet smells that are similar to those of fruits and candy, such as mango, bubble gum or cool mint. Smelling them while at the home may be a sign your teen is vaping in the other room.

If your teen has a shorter fuse than usual, it may be a sign of nicotine withdrawal. Other physical symptoms that point to withdrawal can include anxiety, depression, and difficulty concentrating.

It may be due to vaping-induced dehydration, as some research shows that propylene glycol found in e-cigarettes increases thirst.

Nosebleeds can occur more frequently in teens who are vaping, because it causes the skin inside the nose to dry out. This can especially be the case during winter.

Having bloodshot eyes can be an indication of vaping.

Combining vaping and caffeine can result in jitteriness, anxiety, and moodiness.

Nicotine from e-liquids, found in e-cigarette cartridges, is absorbed far more quickly in comparison to regular cigarettes. When nicotine is consumed in large and concentrated quantities, it can result in poisoning. The most common symptoms of nicotine poisoning are nausea and vomiting, but serious cases can be life-threatening.

Teens who vape also are at risk of facing serious long-term brain development issues from the nicotine, since adolescent brain development can continue well into their 20s, according to the Centers for Disease Control and Prevention (CDC).

Speak to Us for Free

If you believe your teen or another loved one has suffered serious side effects or has lost their lives as a result of vaping, contact our mass tort lawyers from The Dunken Law Firm to discuss a potential juul vaping lawsuit. We can discuss your legal options during a free consultation with one of our highly qualified product liability lawyers. Reach us at (713) 554-6780 or online through our request form.